37 - Kratom and Phenibut: Increasing Use and Abuse 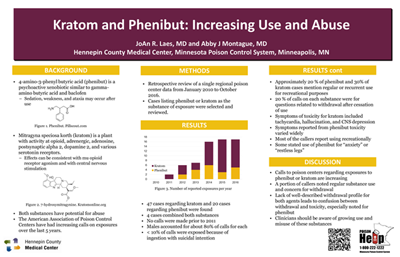 Background
4-amino-3-phenyl butyric acid (phenibut) is a psychoactive xenobiotic that has structural homology with gamma-amino butyric acid (GABA) and p-chloro 4-amino-phenyl-butryic acid (baclofen). Sedation, weakness, ataxia may occur after use of phenibut. Mitragyna speciosa Korth (kratom) is a plant that has opioid neurotransmitter effects and activity at adrenergic, adenosine 2A, postsynaptic alpha2, dopamine 2, and various serotonin receptors. Effects of kratom are consistent with mu opioid receptor agonism, but additional central nervous stimulation symptoms such as tachycardia or seizures have been reported. Abuseâ€”with or without withdrawalâ€”has been infrequently reported in scientific literature, but dependence syndromes would be expected based on the neurotransmitter profile. The American Association of Poison Control Centers have taken increasing calls on kratom exposure in the last five years nationally (2 calls from 2000 to 2005 versus 660 between 2010 and 2015). The increasing use and potential for abuse and withdrawal from phenibut or kratom is important for clinicians to be aware of as both of these xenobiotics are available over the internet or in nutritional stores.

Methods
A retrospective review of the local regional poison center system data was conducted. Cases listing phenibut or kratom as the substance of exposure or question were selected.

Results
The poison center receives 65,000 calls yearly, covering a population of 7 million people among three states. There were 47 calls regarding kratom exposure and 20 calls regarding phenibut between October 2011 and October 2016â€”notably 75% of those calls occurred between 2014 and 2016. The majority of the callers appeared to be using the substances recreationally, with some stating use for treatment of â€œanxietyâ€ or â€œrestless legsâ€. Less than 10% of the calls reported suicidal intention. Approximately 20% of the phenibut related calls and over 30% for kratom mentioned recurrent use of the product for recreational purposes. For each kratom and phenibut approximately 20% of the calls were related to questions regarding withdrawal symptoms after cessation of use.

Conclusions
Calls to poison centers regarding exposures to phenibut or kratom have increased in recent years. A proportion of the callers to a regional poison center noted regular use of the substance and concerns regarding withdrawal. Clinicians should be aware of the growing use and misuse of these substances.