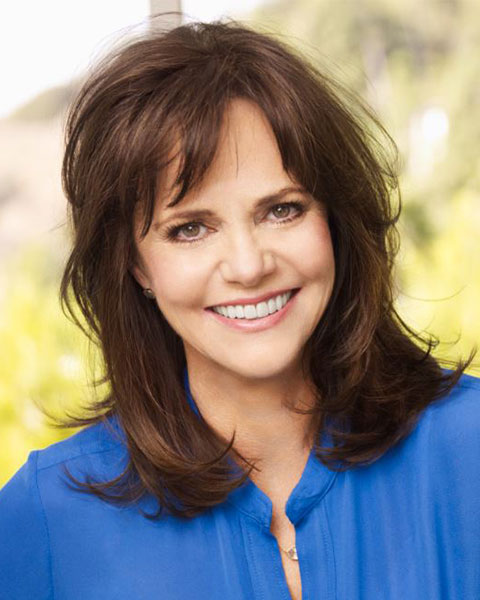 Sally Field is a two-time Academy Award and three-time Emmy Award-winning actor, who has portrayed dozens of iconic roles on both the large and small screens. Her extensive film credits include performances in Robert Benson’s Places of the Heart, for which she received both the Academy Award and a Golden Globe, and Martin Ritt’s Norma Rae, receiving not only the Academy Award but also a Golden Globe. She also received Golden Globe nominations for her work in Smokey and the Bandit, Absence of Malice, Kiss Me Goodbye, and Steel Magnolias and received both SAG and BAFTA nominations for her work in Forrest Gump. For her performance as Mary Todd in Steven Spielberg’s Lincoln, she was given the New York Film Critics Prize for Best Supporting Actress and was nominated for a Golden Globe, SAG Award, BAFTA and an Academy Award. Other films include An Eye for An Eye, Mrs. Doubtfire, Soapdish, Not Without My Daughter, The End, Hooper, Stay Hungry (her first major film role), and Hello, My Name is Doris. She starred in both Punchline and Murphy’s Romance, which were produced by her production company, Fogwood Films.

Born in Pasadena, California and raised in a show-business family, Sally Field is one of the most celebrated, beloved and enduring actors of our time, and now she tells her story for the first time in her intimate and haunting literary memoir, In Pieces, available Fall 2018. In her own words, she writes about a challenging and lonely childhood, the craft that helped her find her voice, and a powerful emotional legacy that shaped her journey as a daughter and a mother. With raw honesty and the fresh, pitch-perfect prose of a natural-born writer, and with all the humility and authenticity her fans have come to expect, Field brings readers behind the scenes for not only the highs and lows of her star-studded early career in Hollywood, but deep into the truth of her lifelong relationships including, most importantly, her complicated love for her own mother. Powerful and unforgettable, In Pieces is an inspiring and important account of life as a woman in the second half of the twentieth century.

In 2012, Sally Field was inducted into the American Academy of Arts and Sciences, and in 2015, she was honored by President Obama with the National Medal of Arts. She has served on the Board of Directors of Vital Voices since 2002 ̶ and also on the Board of The Sundance Institute.