Purpose/Objective(s): Brain metastases (BM) are diagnosed in approximately 15% of breast cancer (BC) patients. The likelihood of developing BM varies according to the biologic subtype of BC, with up to 50% of advanced stage Her2 positive and triple negative (TN) patients likely to develop BM. Biologic subtype is predictive of loco-regional recurrence following breast conserving therapy and/or mastectomy with the highest risk in the TN subtype. Stereotactic radiosurgery (SRS) is an integral component of treatment for limited BM. We sought to determine whether biologic subtype is predictive of local control (LC) of BM treated with SRS.

Materials/Methods: We conducted a retrospective analysis of patients with BC associated BM treated with SRS at our institution from 2004-2017. Patients were included if pathology data and ER/PR/Her2 status were recorded. Patients were subdivided into three biologic subtypes: ER+/Her2- (“Luminal”), Her2+ and TN (“Basal”). MRI’s were performed at 3 month intervals post SRS. Kaplan Meier method was used to estimate the overall survival (OS) distribution defined as time from first SRS to death or last follow-up with comparison among biologic subtypes made by the log-rank test. Cox proportional hazard model was used to analyze association of local failure (LF) with biologic subtypes and to estimate hazard ratios (HR) (95% CI).

Results: 36 patients (66 treatment sites, median of 2 lesions per patient) were included with a median follow up of 14.3 months. The median age of the cohort (all female) was 57 years. 69.7% of lesions were supratentorial. Mean lesion size was 0.73 cc (SD 5.1 cc) and mean dose was 18.25Gy (SD 1.7Gy). 6 patients were treated with whole brain radiation therapy (WBRT) after SRS with 4 patients remaining controlled at the SRS site at the time of WBRT. 2 patients received WBRT after recurrence at the site of SRS with concomitant failure at other sites in the brain (one Her2+, one TN). 9 patients underwent resection prior to SRS. The 12 month LC and OS rates for the entire cohort were 76% and 89%, respectively (See table below for different subtypes). There was no statistically significant difference in LC and OS among the biologic subtypes. Hazard ratios for local failure and mortality comparing different subtypes were not statistically significant, although a borderline significant association was observed with increased risk of local failure of the basal vs. Her2+ subtypes (HR = 3.5, p = 0.06, CI = 0.9-12.8).

Conclusion: In this study, biologic subtype did not impact LC of BC associated BM treated with SRS. A borderline significant association with increased LF was observed for TN patients. Consideration of treatment intensification or altered fractionation to improve LC may be indicated for the TN subtype, pending validation in a larger dataset with longer follow-up.

Author Disclosure: L. Resende Salgado: None. A. Cohen: None. I. Germano: None. J. Lin: None. M. Buckstein: None. 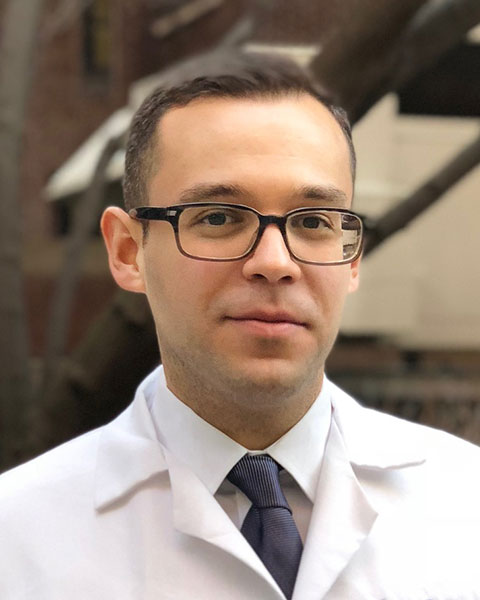 Biography:
I am originally from Belo Horizonte, Brazil and grew up in New York. I received my undergraduate degree from CUNY Hunter College. After college I attended medical school at NYU School of Medicine where I was enrolled in an MD/MPA in health care management double degree program with NYU Wagner Graduate School of Public Service. I completed my medical internship at Lenox Hill Hospital before coming to Mount Sinai for residency. My research interests include patient satisfaction and salivary gland cancers. In my spare time I enjoy playing soccer, hiking and cooking.