Purpose/Objective(s): Although definitive radiation therapy (RT) for advanced larynx/hypopharynx cancer can allow for structural preservation of the larynx, longitudinal data on functional preservation is lacking. We sought to quantitatively define subdomains in laryngeal function that RT continued to impact following treatment cessation.

Results: 96 patients were treated with IMRT from 2004-2014. 91% received CT. 21 developed LR and were excluded, leaving 75 patients. Dedicated follow-up for swallowing ranged from 29-39% in the <1yr period and 15-25% >1yr. Relative to baseline, increased (worse) PAS scores were seen with thin and nectar boluses at all time points (p<0.05, nectar; p<0.01, thin at 2yrs), with a median PAS score of 5 for both at 2yrs (material enters airway and contacts vocal cords, but is not ejected). PAS scores of ≥6 (aspiration during MBS) manifested strongly with thin liquids as opposed to puree consistencies and were found in 64% of patients at <90d, 45% at 90d-1yr, 26% at 1-2yrs, and 50% at >2yrs. PAS scores did not increase significantly for puree or solid boluses across any time point post-RT. Thin and nectar PAS scores were most elevated <90d (p<0.001) and did not show restoration to baseline at 2yrs post-RT (p>0.2 for thin, p>0.4 for nectar). FOIS scores were lower (worse) at all time points (p<0.01 at 2yrs) with a median score of 5 at 2yrs (oral diet requiring special preparation/compensations). FOIS scores of ≤3 (required non-oral nutrition) were identified in 43% of patients at <90d, 24% at 90d-1yr, 16% at 1-2yrs, and 31% at >2yrs. No significant change was observed in FOIS scores between the <90d and later periods. Patients with T4 cancers showed an overall trend toward higher (worse) PAS scores and lower (worse) FOIS scores relative to those with T1-3 tumors. Statistical significance was only evident in the 90d-1yr period (p<0.005).

Conclusion: Patients, particularly those with T4 cancers, undergoing definitive RT for larynx/hypopharynx cancer remain at risk for chronic dysphagia with thin liquids but not solids, and have quantifiable deficits in diet. 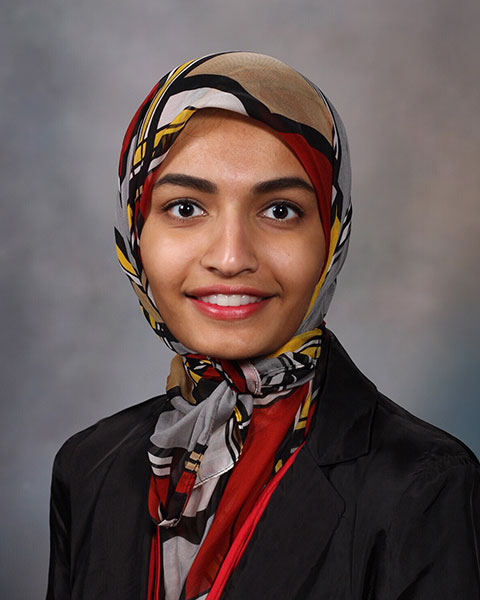 Biography:
Gohar Manzar, Ph.D., is currently a fourth year medical student at the Mayo Clinic School of Medicine applying for Radiation Oncology residencies. Prior to medical school, she earned her Ph.D. in Biomedical Engineering at the University of Iowa, where she used human skin cell-derived induced pluripotent stem (iPS) cells to derive pancreatic beta cells for the cure of Type 1 diabetes. She hopes to one day apply her tissue engineering background to mitigate or even reverse post-radiation changes.