Purpose/Objective(s): Pre- and/or post-operative radiation therapy (RT) may improve local control in patients undergoing surgery for spine sarcomas. In addition, definitive-intent RT may have a role in patients who do not undergo surgery. However, delivery of adequate RT doses is challenging due to proximity of normal structures. We previously reported a Phase II trial of passively scattered proton therapy for spine sarcoma. Here, we hypothesized that scanned beam proton therapy would allow high local control with acceptable toxicity.

Materials/Methods: We conducted a Phase II, NCI-sponsored clinical trial of scanned beam proton therapy for primary or recurrent chordomas and chondrosarcomas of the spine or sacrum. In patients undergoing surgery, CTV1 (encompassing pre-operative gross tumor plus a microscopic margin) was treated pre-or post-operatively to 45-50.4 GyE, CTV2 (encompassing pre-operative gross tumor) post-operatively to a total of 64.8-70.2 GyE, and GTV (only if residual gross disease) post-operatively to a total of 77.4-79.2 GyE. Surgery consisted of en bloc resection with the goal of R0 margins, although in some cases a microscopic positive margin (R1) was planned with the goal of preserving nerve function. In patients not receiving surgery, the same CTV1 and GTV dose levels were used.

Conclusion: Scanned beam proton therapy can be given safely for spine chordomas and chondrosarcomas. Although follow-up is limited, initial results suggest promising outcomes in both the peri-operative and definitive settings. 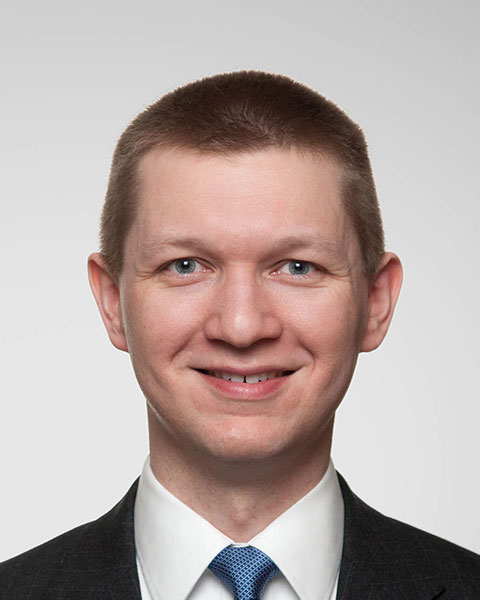 Biography:
David Konieczkowski, MD PhD is a PGY4 resident in the Harvard Radiation Oncology Program. Originally from Cleveland, he completed his MD and PhD at Harvard with a thesis under Levi Garraway, MD PhD on the genomic determinants of resistance to MAPK pathway inhibition in BRAF-mutant melanoma. As a translational researcher, he is interested in using genomic and sequencing-based techniques to advance precision medicine in radiation oncology. Clinically, his interests include sarcoma and head and neck cancers.