Purpose/Objective(s): Single-fraction Stereotactic Radiosurgery (SRS) is considered a standard management strategy for brain metastasis treatment in select patients. As SRS techniques at our institution for multiple metastases have shifted from frame-based treatments with multiple isocenters to frameless treatments with a single-isocenter, concern exists that treatment error is more likely secondary to small rotational error, particularly as the distance from the isocenter increases. We hypothesize that with a 6 degrees of freedom (DOF) couch and immediate pre-treatment imaging, single-isocenter radiosurgery will result in good local control (LC), regardless of distance from the isocenter.

Materials/Methods: All brain metastases treated with linear accelerator based single-isocenter volume modulated arc therapy (VMAT) radiosurgery since the installation of a 6 DOF couch (Varian Perfect PitchTM) up until the time of analysis were captured (2015-2017). Tumors were included for analysis if they received single-fraction SRS, had no prior surgery or radiation, and had available follow-up imaging. The dose was prescribed to the edge of the GTV with no PTV margin. Local failure was defined as a 25% increase in tumor diameter on follow-up MRI or pathologic confirmation of tumor recurrence. Tumors that initially increased in diameter with resolution on subsequent imaging were considered treatment effect rather than tumor progression. Locally controlled tumors were censored at the time of last follow-up, death, or whole brain radiation for distant brain failure. Distance from the isocenter was measured to the geometric center of each target. LC was evaluated by the Kaplan-Meier (KM) method with the log-rank test utilized to compare subgroups. Multivariable analysis for predictors of LC was performed using a Cox regression analysis.

Conclusion: Single-isocenter VMAT SRS with immediate pre-treatment CBCT and 6 DOF couch adjustments appears to offer a high rate of local tumor control regardless of distance from the isocenter. As single-isocenter SRS greatly improves treatment times, it appears to be a highly effective and efficient strategy for brain radiosurgery to intact brain metastases. 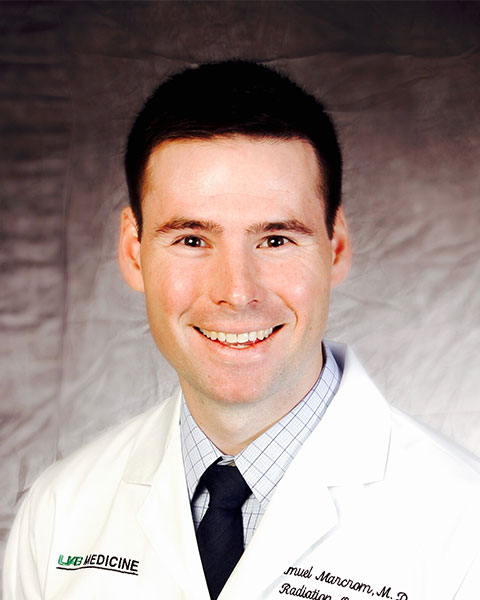 Biography:
Dr. Marcrom is a resident in radiation oncology at the University of Alabama at Birmingham. He attended Lipscomb University for his undergraduate education on a collegiate golf scholarship, and he graduated as valedictorian of his class. Subsequently, he attended the University of Tennessee College of Medicine where he was inducted into the Alpha Omega Alpha honor society and graduated with highest honors. He is currently enrolled in the Clinical Trials Pathway at UAB where his main research efforts involve the central nervous system, head and neck malignancies, and resident education. Dr. Marcrom has been elected to represent radiation oncology residents on the ARRO executive committee, and also serves as a guest editor for the ACR Journal Advisor.