TU_34_3019 - Stereotactic Radiosurgery for Atrioventricular Node Ablation in Swine: A Study on Efficacy and Dosimetric Evaluation of Organs at Risk.

Purpose/Objective(s): Stereotactic radiosurgery (SRS) delivered to arrhythmogenic foci within the heart is a promising treatment modality. We dosimetrically evaluated the radiation dose to the organs at risk of 4 swine that were successfully treated with linac based SRS for AV node ablation.

Materials/Methods: Single‐chamber pacemakers were implanted in four large white breed swine (weight 40–75 kg). The pigs were placed under general anesthesia, and coronary/cardiac computed tomography simulation scans were performed to localize the AV node that was contoured in addition to organs at risk. SRS doses ranging from 35 to 40 Gy were delivered by a linac to the AV node, and the pigs were followed up with pacemaker interrogations to detect potential electrocardiographic changes. Planning was done using Panther software (Prowess Inc, Concorde, CA) version 5.10. One sample t-tests were used to evaluate Dmax of great vessels, esophagus and chest wall as compared to known normal tissue constraints as per RTOG 0631(Dmax great vessels<37Gy; esophagus<16Gy) and AAPM Task Group 101 (Dmax chest wall<22Gy).

Conclusion: Stereotactic radiosurgery is technically feasible and effective for swine AV node ablation using doses 35-40Gy. We have demonstrated, in our swine models that this can be done without exceeding known human normal tissue constraints to the chest wall, esophagus and great vessels. Phase 1 clinical trials on human patients with cardiac arrhythmias who are unfit for catheter ablation are warranted to study this promising treatment modality. 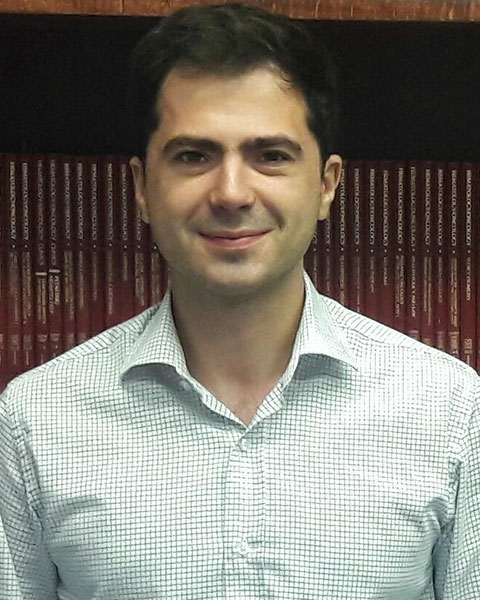 I am a third year radiation oncology resident at the American University of Beirut Medical Center. My areas of interest include hypofractionation and stereotactic radiation therapy as well as palliation. I am also interested in several subsites including CNS, Thoracic, Genitourinary and Breast.

TU_34_3019 - Stereotactic Radiosurgery for Atrioventricular Node Ablation in Swine: A Study on Efficacy and Dosimetric Evaluation of Organs at Risk.

Send Email for Stereotactic Radiosurgery for Atrioventricular Node Ablation in Swine: A Study on Efficacy and Dosimetric Evaluation of Organs at Risk.