Treatment strategies in palliation of pediatric cancer are not well-defined and remain a significant challenge. While surgery is often associated with significant morbidity and extended recovery time, systemic therapy and prolonged courses of radiation can lead to an increased hospital/clinic time. In this context, palliative measures aimed at delivering treatment within a short period of time with minimal toxicity should be prioritized. In this study, we aimed to assess efficacy and safety of a short course (≤5 fractions) of hypofractionated RT for metastatic, or recurrent pediatric malignancies.

A total of 104 lesions in 62 patients aged ≤18 years with metastatic or recurrent disease were treated with a short hypofractionated RT (>1 but ≤5 fractions; ≥3 Gy per fraction) in the period of 2007-2017 in our institution. Primary endpoint of the study was local control (LC). Other endpoints included treatment response, overall survival (OS), progression-free survival (PFS), and toxicity. Actuarial LC and survival were examined using Kaplan-Meier and log-rank analyses. Toxicities were assessed using the Common Terminology Criteria for Adverse Events v.4.0.

To the best of our knowledge, this is the largest to-date analysis of outcomes with short hypo-fractionated RT in palliation of pediatric malignancies. Short regimen of radiation (≤5 fractions) yields effective local control and excellent treatment response with very favorable side effect profile. Select pediatric patients with symptomatic metastases or recurrent disease can be considered for a short palliative course of RT.
Author Disclosure: S. Lazarev: None. S.L. Wolden: None. 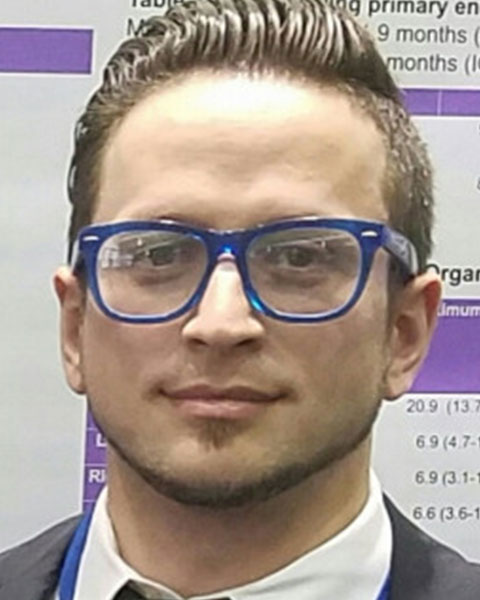 Biography:
I am currently a Chief Resident in Radiation Oncology at Mount Sinai Hospital in New York, NY. My research interests lie in the field of head and neck malignancies, pediatric tumors, LDR-brachytherapy for prostate cancer, and SBRT for hepatocellular carcinoma. My clinical interests are broad, and include treatment of pediatric malignancies, gynecologic, head and neck, and gastrointestinal cancers.

I grew up in the south of Russia where I studied foreign languages at a linguistic university. At the age of 21, I moved to California where in 2009 I graduated from UC Berkeley with a BA in biochemistry and molecular biology. I received my medical degree at University of Vermont College of Medicine in 2014, and then returned to the Bay Area to complete a medicine internship at Highland Hospital in Oakland. In 2015 I joined the Radiation Oncology Residency Program at Mount Sinai. Outside of medicine, I enjoy learning foreign languages, playing the piano, traveling abroad, and playing soccer.