Purpose/Objective(s): Stereotactic body radiotherapy is used to treat primitive and metastatic lung lesions. SBRT has also been used to treat recurrent lung nodules after previous EBRT . The aim of this study is to evaluate the safety and efficacy of SBRT of thorax lesions previously treated with hypofractionated RT. We evaluated prognostic factors related to first or second course of treatment in terms of toxicity, Local Control and Overall Survival.

Materials/Methods: Between 2011 and 2017, 56 pts recurred in the lung, after previous EBRT or SBRT delivered to the same site. Median age was 69.5 yr ,with KPS >70. The histology was Squamous cell carcinoma , Adenocarcinoma , other and unknown in 12,29,9 and 6 pts respectively. 29 pts had primary tumor and 27 pts had metastatic lesions (14 CRC, 8 NSCLC, 5 other). 16 pts had synchronous mets at the time of diagnosis and metachronous mets was present in 24 pts at the time of re-irradiation. 20 pts received chemotherapy after first course of RT and 12 pts after retreatment. Recurrences were detected by CT in 100% pts and in 53% pts also Pet scan was performed. Seven percent of tumors received prior EBRT and 93% received prior SBRT. All pts were re-irradiated with SBRT. Previous median volume GTV was 21.25 cc (1.25-186 cc), median retreated volume GTV was 22.6 cc (1.9-192 cc). First treatment median dose was 30 Gy in median number of 3 fraction, the median re-irradiation dose was 33.5 delivered for a median of 3 fractions prescribed to the 70% isodose in 35 lesions. (Median BED10 > 100 Gy in 64% lesions). SBRT was delivered by 6MV Linac using beam modulator equipped with 4 mm MLC, through two co-planar and no coplanar arcs with VMAT optimization. Breath-hold and free breathing technique was employed in 24 pts and 32 pts respectively during re-irradiation. Set-up and isocenter position was controlled before each fx using CBCT .The response was evaluated 60 days after SBRT by CT and PET scan and every 4 months successively. Toxicity was assessed by CTCAE score.

Results: All pts were evaluated for response. Median FU was 17 (range 7-57) months. Median time to re-irradiation was 14 (range6-105) months. The crude local control (LC) was 80.4 % ( 100% at 6 and 12 months, and 71 % at 2 year. Analysis did not demonstrate any factors statistically significant for LC.The median overall survival (OS) was 56.18 months. OS was 100% and 88% , at 1 and 2 year respectively.At Univariate and Multivariate analysis time to re-irradiation >12 months and synchronous mets were found to be statistically significant for OS (p<0.02) . No patients experienced grade 3-4 toxicity. Only one pts showed atelectasis after re-SBRT.

Conclusion: In our experience re-irradiation after Hypofractionated RT for lung recurrences is safe and effective. The time between first and second treatment is not significant for toxicity. SBRT, providing excellent LC (80.4%,) could be considered a valid option for pts with recurrent lung lesions. 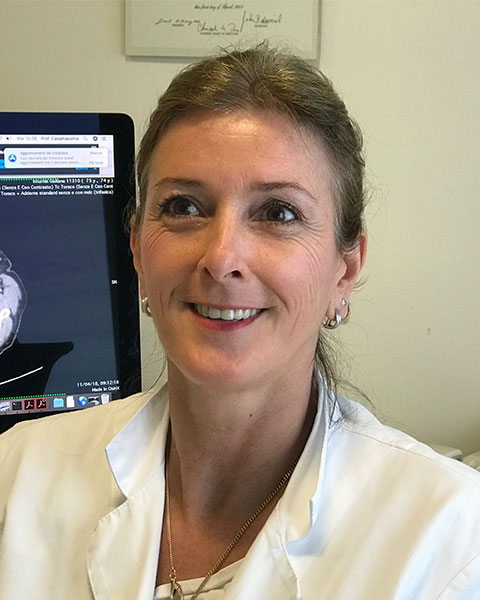