No objective criteria exist to measure radiation-induced lung damage (RILD). This leads to variability in toxicity reporting and poor understanding of its relationship with dose. We recently developed a set of twelve CT-based imaging biomarkers of RILD 12-months after RT, which correlate with observed parenchymal change, volume reduction and pleural change. In this work we present the objective values of these biomarkers and investigate their correlation with respiratory function tests.

The biomarkers were calculated on a sub-group (n=50) of a non-randomized phase I/II trial of isotoxic chemoradiation in stage II/III non-small cell lung cancer patients. Respiratory function tests were available for 41 subjects at baseline and 12-months.

The table describes the range of changes seen at 12-months. The biomarkers exhibited significant inter-patient variability in degree of measured change. All patients had evidence of RILD. The combination of sub-types measured with higher severity was variable. Decline in breathing function was assessed as change in FEV1% and DLCO. Five imaging biomarkers were moderately correlated with decline in FEV1% (Pearson’s correlation coefficient, ρ≤-0.3, p≤0.10), particularly those relating to mediastinal shift. No biomarker correlated with DLCO. These findings need to be investigated in larger cohorts. 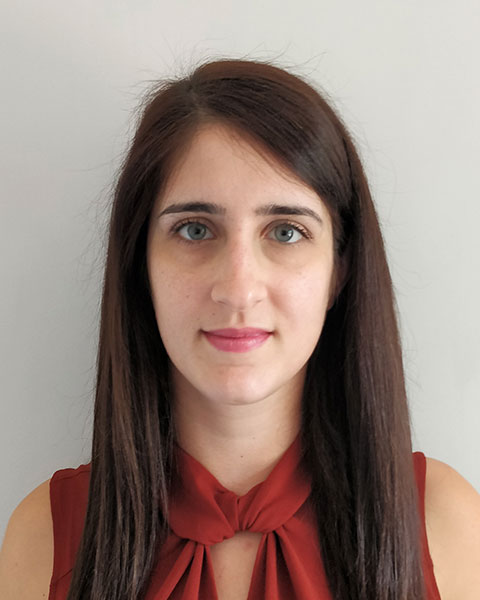 I acquired BSc in Physics at University of Minho (Braga, Portugal), and an MSc in Medical Physics at University of Porto (Porto, Portugal). I have then obtained my PhD in 2016 in Medical Physics at University College London (London, UK). My project consisted of using CBCT to evaluate the need for treatment adaptation in head & neck and lung patients, both for IMRT and proton therapy. After my PhD I have worked at UCL as research associate developing image analysis tools for radiation-induced lung damage. I have recently been awarded a Royal Academy of Engineering Research Fellowship to develop novel methods to study and predict late effects of radiation in childhood cancer survivors. My research interests are in the use of imaging to improve radiotherapy delivery, namely for applications in proton therapy, treatment planning and adaptation, and minimising side-effects of curative radiation.