Purpose/Objective(s): Atrial fibrillation (AF) is a common cardiac arrhythmia which typically originates from arrhythmogenic foci in the pulmonary veins (PV) and is associated with increased risk of stroke, heart failure, and all-cause mortality. In patients who fail first-line anti-arrythmic drug therapy, electrical isolation of the pulmonary veins (PVI) is an effective treatment but requires prolonged anesthesia and carries procedural risk. As previously shown in porcine models, stereotactic body radiation therapy (SBRT) to the PV antra may provide results similar to catheter ablation in a noninvasive manner. We hypothesize that it is possible to create single-fraction SBRT plans which would deliver an ablative dose to the bilateral PV antra while respecting organ at risk (OAR) tolerances.

Materials/Methods: To simulate the planning process, four different thoracic 4D-CT simulation scans taken every 10% of the respiratory cycle were fused with corresponding contrast-enhanced diagnostic CT scans. The CTV encompassed the superior and inferior PV antra and PV carina bilaterally. An ITV was created by expansion based on respiratory displacement, and a 3mm expansion to PTV was used. Delivery was by step-and-shoot IMRT with eight coplanar beams, multi-leaf collimation, and 6MV photons. Prescription was mean PTV dose of 2500 cGy. Maximum dose (Dmax) to the cord and esophagus was limited to 1000 cGy and 1600 cGy, respectively. Quality assurance (QA) testing with MapCheck was performed for one of the plans. To qualitatively confirm localization, an anatomically accurate thoracic phantom with dynamic respiratory motion capability was assembled and simulated for planning according to the above specifications. It was then treated during both static and dynamic respiratory motion; respiratory gating with infrared tracking was employed for the latter. Film was placed in pertinent treatment areas and inspected to ensure adequate dose density.

Results: See the table for pertinent parameter means for the CTV, PTV, and OAR structures. RTOG dose constraints for spinal SBRT were met for the cord, esophagus, and lungs in all four plans. The plan chosen for QA passed at 5% dose and 3mm distance to agreement criteria on both relative and absolute dose comparison. On phantom testing, qualitative localization was confirmed with adequate dose density for both static and dynamic treatments.

Conclusion: This study shows the feasibility of delivering ablative SBRT to the bilateral PV antra while respecting standardized OAR tolerances. PTV coverage was most compromised by the esophageal dose constraint, and the esophageal Dmax was relatively high considering the elective nature of definitive AF ablation. For this reason, a fractionated SBRT regimen may be considered. 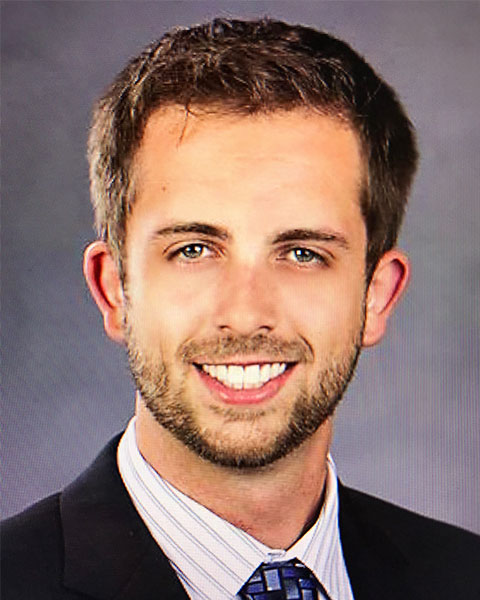 Radiation Oncology resident living in Long Beach, CA after having been displaced from multiple prior locations including Salt Lake City UT, Dallas TX, Portland OR, and most recently from Miami FL. I went to college at Westminster College in Salt Lake City, and to medical school at University of Miami. Prior to medical school, prior employment includes working on a farm for nearly 5 years and then working as a personal trainer during college. I am keeping interests during residency intentionally broad to avoid limitations, so research is often satisfying as a means by which to dive deep into a particular subject. Outside of work, I spend alot of time with my family and significant other, and most often find myself outdoors, Otherwise, I enjoy home improvement projects and reading. Overall, willing to learn and eager to engage in both my personal and professional lives.

Send Email for Radiosurgical Pulmonary Vein Isolation for the Treatment of Atrial Fibrillation: A Dosimetric Optimization and Dynamic Phantom Study