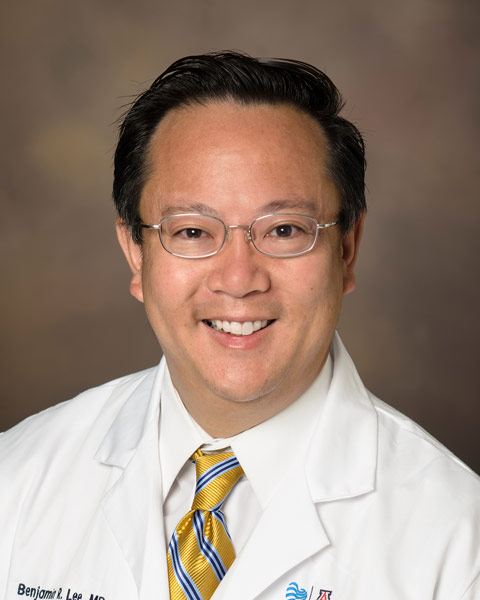 Dr. Benjamin Lee, Professor & Chief of Urology at the University of Arizona College of Medicine has focused his career on advancing new treatments for renal cell carcinoma as well as calculus disease, while developing new technologies & techniques for Urologic Oncology & Endourology. He is author or co-author of more than 200 manuscripts, book chapters, videos and abstracts. Dr. Lee graduated from Cornell University magna cum laude. He then attended the Johns Hopkins School of Medicine, and continued his training at the James Buchanan Brady Urological Institute at the Johns Hopkins Hospital. He was Assistant Professor at the North Shore Long Island Jewish Medical Center, and then promoted to Associate Professor. He was promoted to Professor with tenure at the Department of Urology at the Tulane University School of Medicine in 2008, and assumed the position of Professor and Chief of Urology at the University of Arizona College of Medicine in 2016. He has published on methods identifying methods of decreasing recurrence of cancer; explanations why the immune system may be activated differently following laparoscopy compared to open surgery, and has developed nanotechnology applications in urologic disease as well as studies into preserving kidney function during laparoscopic & robotic kidney surgery. Dr. Lee’s research has been recognized by awards from the American Urological Association, The Endourological Society and Urology Journal. He was awarded the prestigious Arthur Smith Award in 2008 for his contributions to the discipline of robotics, laparoscopy, and minimally invasive surgery. He was Organizing Secretary of the 31st World Congress of Endourology which was held in New Orleans, LA in 2013.