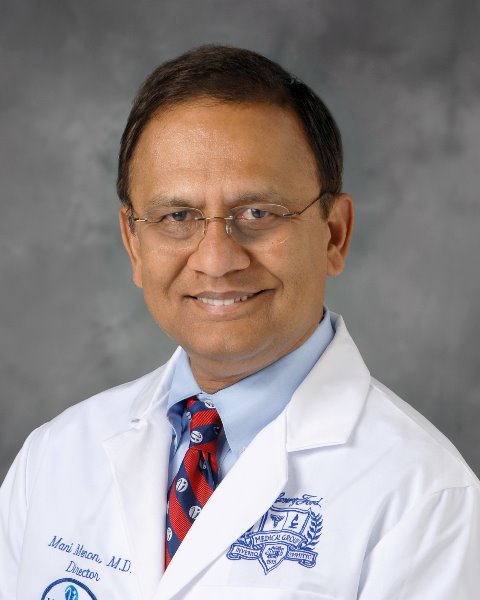 Mani Menon, M.D., is the Rajendra and Padma Vattikuti Chair in Oncology and Director of the Vattikuti Urology Institute at Henry Ford Health System. Dr. Menon graduated from JIPMER, Pondicherry in India and completed his residency at the Brady Urological Institute at the Johns Hopkins Hospital in 1980. He served on the faculty at Washington University in St. Louis, from 1980 to 1983, when was appointed Founding Chairman and Professor of the Division of Urological and Transplantation Surgery at the University of Massachusetts Medical School, the youngest Chairman in the country, at that time. At Henry Ford Hospital, Dr. Menon started incorporating computer-integrated surgical system into clinical practice and established the first cancer-oriented robotics program in the world.Techniques developed by Menon(popularly called robotics surgery) has revolutionized the field of urological oncology and laid the framework for the extension of robotics to other surgical disciplines. Dr. Menon is a recipient of the Gold Cystoscope award of the American Urological Association, a member of the American Association of Genitourinary Surgeons and of the Clinical Society of GU Surgeons. In 2008, the President of India awarded him the Dr. B.C. Roy Award for his pioneering contributions to the field of Medicine which is the highest award given by the Government of India for achievements in Medical Science. In 2014, he was awarded the Hugh Hampton Young Award by the American Urological Association, for outstanding contributions to urology. In 2016, he was awarded the Keyes Medal by the American Association of Genitourinary surgeons. Some of Menon's personal effects have been featured in the Smithsonian National Museum of American History as a permanent exhibit. In 2018 , the John Hopkins University awarded him a membership to the Society of Scholars, the highest award of the university for an alumnus.