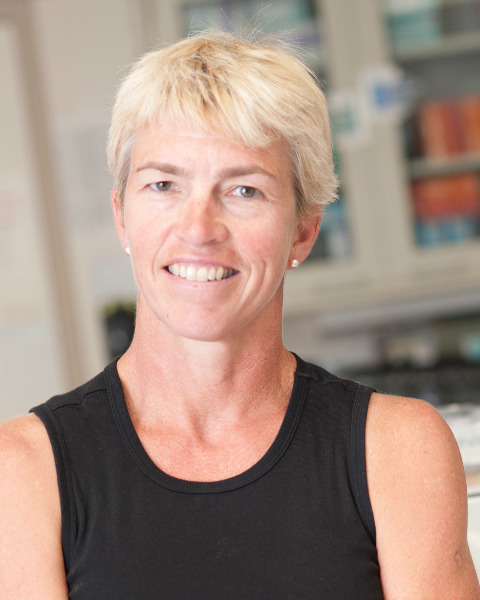 JoAnne Flynn has a Bachelor of Science in Biochemistry, from the University of California at Davis in 1982. She earned her PhD from University of California at Berkeley in Microbiology and Immunology in 1987, where she studied the pathogenesis of cystic fibrosis isolates of Pseudomonas aeruginosa under Dr. Dennis Ohman. Dr. Flynn’s first post-doc was with Dr. Magdalene So at the Scripps Clinic Research Institute in La Jolla, California, developing on Salmonella vaccine vectors against various parasitic diseases, including malaria. In 1990, she joined the lab of Dr. Barry Bloom at the Albert Einstein College of Medicine, as a Howard Hughes Research Associate, where she began her studies in tuberculosis. Dr. Flynn joined the faculty of the Department of Molecular Genetics and Biochemistry (now Microbiology and Molecular Genetics) at the University of Pittsburgh School of Medicine in 1994. She was promoted to Associate Professor in 2000 and to Full Professor in 2006. Dr. Flynn has been a member of the Microbiology and Immunology Graduate Program for 24 years, and was Director of the Molecular Virology and Microbiology Graduate Program for 5 years. She is also the Program Director on an NIH T32 Training Grant. She has numerous grants from NIH and the Bill and Melinda Gates Foundation, among others. She was an Editor at Infection and Immunity from 2004-2014 and is currently a Section Editor for PLOS Pathogens. Dr. Flynn has served on numerous grant review study sections, on committees for national organizations, and is currently a member of the NIAID Board of Scientific Counselors. She is the current Past-President of the American Association of Immunologists (AAI), and a Fellow of the American Academy of Microbiologists. She has published over 180 papers, and collaborates with scientists worldwide. Her research in tuberculosis is focused on immunology, host-pathogen interactions, vaccines, drugs, and animal models, and she has developed and used the non-human primate as a model for tuberculosis over the past 20 years.