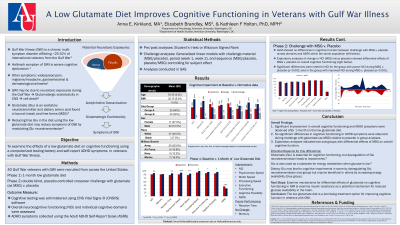 Objectives: The objective of this research was to investigate a novel low glutamate dietary intervention for Gulf War Illness (GWI), a chronic multi-symptom disorder that includes cognitive dysfunction.

Methods: Forty GW veterans with GWI were recruited from across the US. As part of a larger clinical trial, participants completed computerized cognitive testing and the Adult ADHD Self-Report Scale (ASRS) using CNS Vital Signs® (CNSVS) software.  Before diet initiation, subjects received intensive dietary counseling. Post-diet assessments were completed after 1 month on the diet, and then participants were randomized to a 2-week double-blind placebo-controlled crossover challenge with glutamate (MSG)/placebo administered over 3 days of each week. The CNSVS battery was administered again on the 3rd day of each challenge week. The challenge data have not yet been un-blinded, and therefore will not be included in this abstract. Pre-post testing (t-test or Wilcoxon Signed Rank test) was conducted for each domain in the CNSVS battery, including an overall marker of neurocognitive function (NCI) and the ASRS.

Conclusions: Veterans with GWI showed major improvements in cognitive function after 1-month on a low glutamate diet, including improvement in overall neurocognitive status. Upcoming analysis of the double-blind placebo-controlled crossover challenge data will provide additional information on which cognitive domains are directly affected by challenge with glutamate relative to placebo.

Funding Sources: The US Army Medical Research Acquisition Activity, 820 Chandler St, Fort Detrick MD 21702-5014 is the awarding and administering acquisition office. This work is supported by the Office of the Assistant Secretary of Defense for Health Affairs through the Gulf War Illness Research Program. Opinions, interpretations, conclusions and recommendations are those of the author and are not necessarily endorsed by the Department of Defense.