(P18-014-20) Diet Quality and Depression in A Midlife Biracial Cohort of Women: The Role of Stress And Early Life Adversity 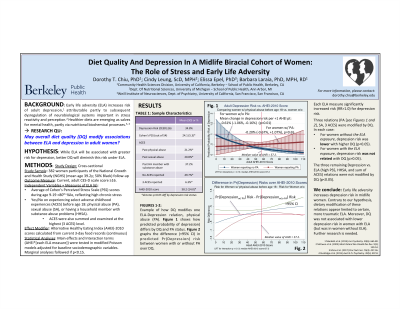 Objectives: Stress exposure may impose an altered physiological state to modify relations between diet and the brain. We investigate if current perceived stress and childhood trauma might moderate diet quality and depression risk associations in women.

Results: Interactions between AHEI and high perceived stress (p=0.03), past physical abuse (p=0.08), and past sexual abuse (p=0.04) were significant in crude models. After adjustment, AHEI with high stress (p=0.04) and physical abuse (p=0.09) maintained some significance. In crude and adjusted models, predicted probabilities of depression risk were significantly higher (p< 0.05) in high vs. low perceived stress women, as well as between women with past physical or sexual abuse vs. those without. However, these differences were only observed for AHEI scores above certain thresholds (in adjusted analyses: approx. AHEI ≥35 for high perceived stress, AHEI ≥58 for physical abuse, and AHEI ≥55 for sexual abuse). For AHEI scores outside those ranges, differences between predicted probabilities of depression were not seen (p >0.05). Prior living with addiction did not modify diet-depression relations (p >0.05).