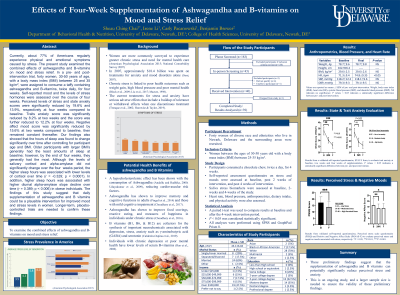 Objectives: Currently, about 77% of Americans regularly experience physical and emotional symptoms caused by stress. The present study examined the combined effects of ashwagandha and B-vitamins on mood and stress relief.

Methods: In a pre- and post-intervention trial, forty women, 30-50 years of age, with a body mass index between 25 and 35 kg/m2, were assigned to consume a taffy containing ashwagandha and B-vitamins twice daily for four weeks. Self-reported mood, sleep duration, and levels of stress hormones were assessed over the course of four weeks. Paired t-tests were used to compare variables across all possible pairs of time points, and linear mixed models featuring random intercepts were employed to investigate linear changes over time in the same set of variables. Pearson’s correlation coefficient was used to establish the strength of the relationship between selected variables. The statistical significance level was set at 0.05.

Results: Perceived levels of stress, state anxiety, and traits anxiety scores were significantly reduced by 19.6% (p < 0.001), 14.3% (p = 0.03), and 12.2% (p = 0.01), respectively at four weeks compared with baseline. Negative affect was significantly reduced by 15.6% (p = 0.02) at two weeks compared to baseline, then remained constant thereafter. Our findings also showed that participants’ hours of sleep was found to change significantly over time after controlling for participant age and BMI. Older participants with larger BMI’s generally had the least amount of sleep at baseline; however, by the end of four weeks, they generally had the most. Although the levels of salivary cortisol and alpha-amylase did not significantly change over the four-week period, higher sleep hours were correlated with lower levels of cortisol over time (r = -0.329; p < 0.001). In addition, higher sleep hours were correlated with higher diurnal alpha-amylase slope decline over time (r = 0.389; p = 0.006) in obese individuals.

Conclusions: The findings of this study suggest that daily supplementation of ashwagandha and B-vitamins could be a plausible intervention for improved mood and stress levels in women. Longer-term, placebo-controlled trials are needed to confirm these findings.

Funding Sources: This research was funded by the Food Sciences Corporation. Funder had no role in data collection, data analysis or interpretation, or writing of the abstract.