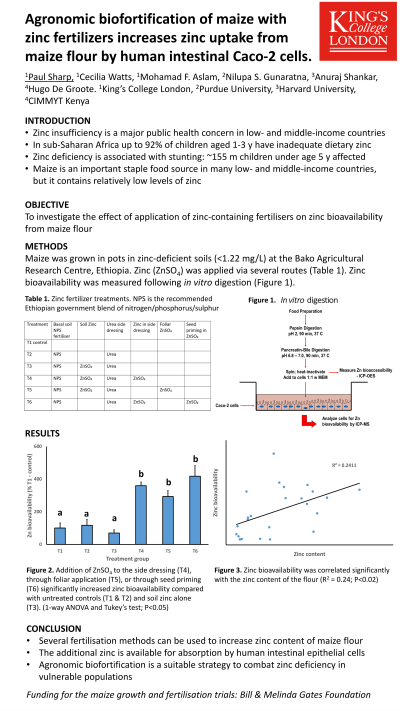 Objectives: Zinc deficiency is prevalent in many low- and middle-income countries. Maize is an important staple food source in many of these regions, however, it contains low levels of nutritionally important minerals including zinc. The purpose of this study was to test the hypothesis that application of zinc-containing fertilisers would increase both the zinc content of, and amount of zinc available for absorption from, maize flour.

Methods: Maize was grown in pots in zinc-deficient soils (< 1.22 mg/L) at the Bako Agricultural Research Centre, Ethiopia. Zinc (ZnSO4) was applied via several routes: directly to the soil; in the side dressing; as a foliar application; or through seed priming. Zinc content of maize flour samples was measured by ICP-OES. Flour samples were then subjected to simulated in vitro gastrointestinal digestion and zinc uptake by human intestinal Caco-2 cells was measured using ICP-MS.

Results: Addition of zinc to the soil alone did not increase zinc uptake by Caco-2 cells compared with untreated control maize. In contrast, addition of ZnSO4, to the side dressing (3.6-fold increase), through foliar application (2.9-fold increase), or through seed priming (4.2-fold increase) significantly increased zinc uptake compared with untreated controls and the soil zinc treatment groups (1-way ANOVA and Tukey’s test; P< 0.05). Zinc uptake by Caco-2 cells was correlated significantly with the zinc content of the flour (r2 = 0.24; P< 0.02).

Conclusions: Together, these data demonstrate that several fertilisation methods can be used to increase zinc content of maize flour. This additional zinc is, at least partly, available for absorption by human intestinal epithelial cells. Agronomic biofortification is therefore a promising strategy to combat zinc deficiency in vulnerable populations.

Funding Sources: This work was funded in part by a grant from the Bill & Melinda Gates Foundation.