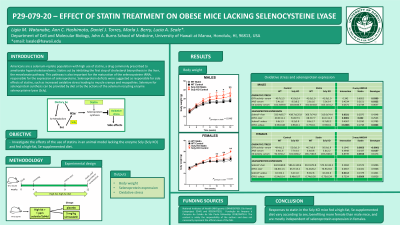 Objectives: Americans are a selenium-replete population with high use of statins, a drug commonly prescribed to ameliorate hypercholesterolemia. Statins act by inhibiting the first step of cholesterol biosynthesis in the liver, the mevalonate pathway. This pathway is also important for the maturation of the selenocysteine tRNA, responsible for the expression of selenoproteins. Selenoprotein deficits were suggested as responsible for side effects of statins, such as increased oxidative stress leading to muscle cramps and myopathies. Selenium for selenoprotein synthesis can be provided by diet or by the actions of the selenium recycling enzyme selenocysteine lyase (Scly). Our objective was to investigate the effects of the use of statins in an animal model lacking the enzyme Scly and fed a high-fat, Se-supplemented diet.

Funding Sources: National Institutes of Health (NIH) grants U54MD007601 Ola Hawaii (subproject 5544) and R01DK47320, and Fundação de Amparo à Pesquisa do Estado de São Paulo fellowship 2018/09478-4. The content is solely the responsibility of the authors and does not necessarily represent the official views of the NIH.