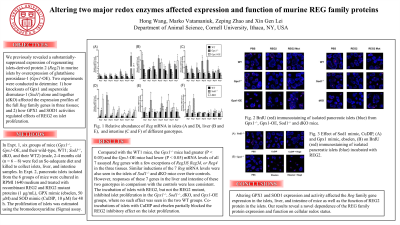 Objectives: We previously revealed a substantially-suppressed expression of regenerating islets-derived protein 2 (Reg2) in murine pancreatic islets by overexpression of glutathione peroxidase-1 (Gpx1-OE). Two experiments were conducted to determine: 1) how knockouts of Gpx1 and superoxide dismutase-1 (Sod1) alone and together (dKO) affected the expression profiles of the full Reg family genes in three tissues; and 2) how GPX1 and SOD1 activities regulated effects of REG2 on islet proliferation.

Results: Compared with the WT1 mice, the Gpx1-/- mice had greater (P < 0.05) and the Gpx1-OE mice had lower (P < 0.05) mRNA levels of all 7 assayed Reg genes with a few exceptions of Reg3ẞ, Reg3δ, or Reg4 in the three tissues. Similar inductions of the 7 Reg mRNA levels were also seen in the islets of Sod1-/- and dKO mice over their controls. However, responses of these 7 genes in the liver and intestine of these two genotypes in comparison with the controls were less consistent. The incubation of islets with REG2, but not the REG2 mutant, inhibited islet proliferation in the Gpx1-/-, Sod1-/-, dKO, and Gpx1-OE groups, where no such effect was seen in the two WT groups. Co-incubations of islets with CuDIP and ebselen partially blocked the REG2 inhibitory effect on the islet proliferation.

Funding Sources: This research was supported in an NIH grant DK 53,018.