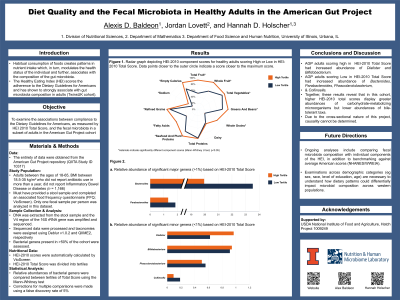 Objectives: The human gastrointestinal microbiota contributes to the relationship between diet and health via microbial metabolism of undigested food components. Thus, it is valuable to understand the relations between gut microorganisms and diet quality. Herein, we examined the associations between compliance to the Dietary Guidelines for Americans, as measured by the Healthy Eating Index (HEI) 2010 scores, and the fecal microbiota in a subset of healthy adults in the American Gut Project cohort.

Methods: This was a cross-sectional observational study of healthy adults (n=1,573 (984 females); BMI:18.5-29.9 kg/m2; 20-90 years of age) from the American Gut Project cohort who provided a stool sample and completed a Food Frequency Questionnaire (FFQ; VioScreen). Fecal samples were processed using Earth Microbiome Project protocols. Briefly, DNA was extracted from the stool samples and the V4 region of the 16S rRNA gene was amplified and sequenced. Taxonomies were determined using Greengenes 13_8. HEI-2010 scores were calculated by VioScreen, and for the purposes of this study, further divided into tertiles. Bacterial genera that were present in at least 50% of the cohort were assessed. Bacterial relative abundances between high and low tertiles of HEI total score were compared using the Mann-Whitney test. Corrections for multiple comparisons were made using a false discovery rate of 5%.

Conclusions: These results reveal that higher HEI-2010 total scores were associated with greater abundances of SCFA-producing microorganisms but inversely associated with bile-tolerant taxa. Ongoing analyses include further examination of relations between the 12 different components of the HEI-2010, as well as examining differences among demographic groups.