(P29-028-20) Antioxidants Consumption and Depression: A Cross-Sectional Analysis of the ELSA-Brasil Study 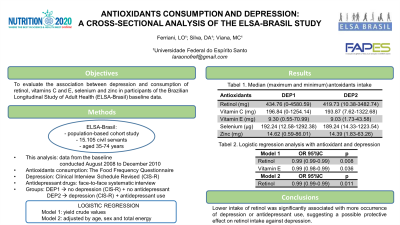 Objectives: To evaluate the association between depression and consumption of retinol, vitamins C and E, selenium and zinc in participants of the Brazilian Longitudinal Study of Adult Health (ELSA-Brasil) baseline data.

Methods: This study is part of the ELSA-Brasil, a population-based cohort study with 15,105 civil servants aged 35-74 years. In this analysis, we included cross-sectional data from the baseline examination conducted from August 2008 to December 2010. Antioxidants consumption was measure by The Food Frequency Questionnaire (FFQ) using the Nutrition Data System for Research (NDSR) software. Depression disorder was accessed by a Clinical Interview Schedule Revised (CIS-R). The use of antidepressant drugs was recorded during a face-to-face systematic interview about use of continuous medication in the prior two weeks. Logistic regression models were built comparing two groups: DEP1 - no depression by CIS-R and no current antidepressants use, and DEP2 - depression by CIS-R or current use of antidepressant. Model 1 yield crude values and model 2 adjusted by age, sex and total energy. These analyses were carried out using the software Stata and p < 0.05 was considered significant.

Conclusions: A lower intake of retinol was significantly associated with more occurrence of depression or antidepressant use. Although the magnitude of ORs is small, these results suggest a possible protective effect on retinol intake against depression disorder.