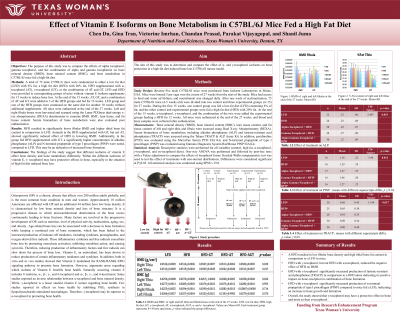 Methods: A total of 75 male C57BL/6 mice were randomized to either a low fat diet (LFD) with 6% fat, a high fat diet (HFD) with 20% fat, HFD supplemented with alpha tocopherol (AT), gamma tocopherol (GT), or the combination of AT and GT. LFD and HFD were provided to corresponding groups of mice without vitamin E isoform supplements for 15 weeks to induce bone loss. At the end of the 15 weeks, AT, GT, and a combination of AT and GT were added to 3 of the HFD groups and fed for 10 weeks. LFD group and one of the HFD groups were continued on the same diet for another 10 weeks without additional supplements. All mice were euthanized at the end of the 25 weeks period. Left and right fibula bones were excised, cleaned, and scanned using the Lunar PIXImus dual-energy x-ray absorptiometry (DEXA) densitometer to assess BMD, BMC, lean tissue, and fat tissue content. Serum biomarkers of bone metabolism were evaluated post euthanization.

Results: HFD resulted in significantly lower fibular BMD and higher tibial bone fat content in comparison to LFD. Animals in the HFD supplemented with GT, but not AT, showed significantly reduced effect of HFD in lowering BMD. Additionally, in the group fed HFD supplemented with GT, a significantly higher concentration of alkaline phosphatase (ALP) and N-terminal propeptide of type I procollagen (PINP) were noted, compared to LFD. This may be indicative of increased bone formation resulting from GT incorporated into the HFD diet.