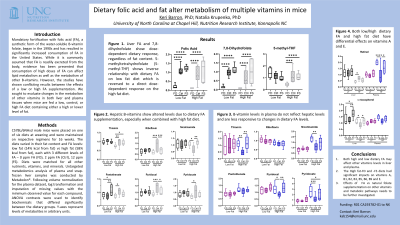 Objectives: To determine how low and high folic acid (FA) intake, combined with either low or high-fat diets, affects other vitamins in mouse liver and plasma.

Methods: C57BL/6NHsd mice were placed on one of six diets at weaning and maintained for 16 weeks. The diets varied in their fat content and FA levels: low fat (14% kcal from fat) vs high fat (58% kcal from fat) with 3 different FA levels- 0 ppm FA (FD), 2 ppm FA (Ctrl), 12 ppm (FS). Diets were matched for all other vitamins and minerals. Untargeted metabolomics analysis of plasma and snap-frozen liver samples was conducted at Metabolon®.

Results: In liver, excess dietary folic acid on a low-fat diet resulted in significantly increased levels of pantothenate, α-tocopherol, FA and several folate metabolites. When FA was over-supplemented in combination with a high fat (HF) diet, α-tocopherol was increased along with several nicotinate and pantothenate metabolites. Interestingly, the HF-FD and -FS diets demonstrated similar effects. These diets resulted in significantly decreased levels of riboflavin, thiamine, vitamin A, and vitamin B6 metabolites while increasing levels of pantetheine metabolites.

In plasma, fewer changes with significant differences were observed when mice were fed HF diets. Several nicotinate metabolites were significantly elevated due to the FD diet with no change due to FS. Additionally, there were no changes in pantothenate or riboflavin in the plasma. Interestingly, the HF- FD and -FS diets induced similar responses but in opposite directions in plasma vs liver. The plasma levels of thiamine, vitamin A, and vitamin B6 metabolites were all significantly increased due to both low and high FA, whereas in the liver they were decreased. Additionally, no changes in α-tocopherol were seen in plasma, but the HF-FD diet raised γ/β-tocopherol levels over 2-fold despite equal amounts of vitamin E among all diets.

Conclusions: Untargeted metabolomic analysis revealed that diets with too high or too low folate affect other vitamins both in liver and plasma. These effects were further modulated by dietary fat levels. The HF-FD and -FS diets had significant impact on vitamins A, B1, B2, B3, B5, B6, B9 and E, along with their related derivatives, which may have serious implications for multiple metabolic pathways.