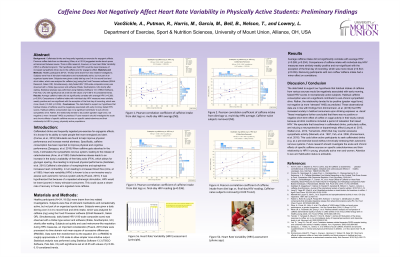 Objectives: Caffeine is a widely consumed stimulant on the beverage market. It is known to affect the autonomic nervous system (ANS), influencing the balance of parasympathetic versus sympathetic drive. This can be measured by heart rate variability (HRV) – fine scale changes in normal sinus rhythm. However, there has been little research done regarding the influence caffeinated drinks have on HRV in active university students. The purpose of this observational study is to examine the relationship between habitual caffeine intake and morning HRV readings in this population. It is hypothesized that higher intakes of caffeine will be associated with lower, more sympathetic HRV scores.

Methods: Healthy participants (N=24, 18-25y) were drawn from two related investigations. Subjects were free of stimulant medications and recreationally active, but not part of an organized sports team. Subjects were given a daily diet log over 3-4 d to record food and drink intake, which was analyzed for caffeine (mg) using the Food Processor software (ESHA Research, Salem OR). Simultaneously, daily fasted HRV (100-scale composite score) was observed with a Holter-type sensor and software (ithlete, Southampton, UK) shortly after waking.

Results: Average caffeine intake did not significantly correlate with average HRV (r=0.269; p=0.204). Comparisons of caffeine intake with individual-day HRV measures were similarly weakly positive and non-significant with the exception of the final day of recording, which was more robust (r=0.543; p=0.036).

Conclusions: The data failed to support our hypothesis that habitual intakes of caffeine would be negatively associated with early morning, fasted HRV scores. Habitual caffeine consumption was not a significant contributor to sub-chronic sympathetic drive. Rather, the relationship tended to be positive (greater vagal tone), not negative (a more “stressed” ANS) as predicted. Future research should investigate the acute and chronic effects of specific caffeine sources on specific catecholamines and their relationship to HRV in young, physically active populations.