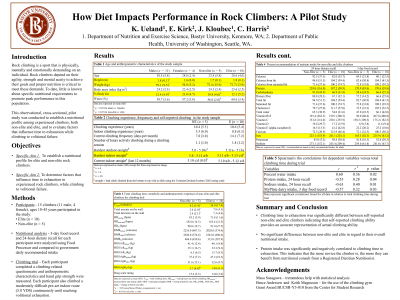 Has Audio
Objectives: This observational, cross-sectional, pilot study was conducted to establish a nutritional profile among experienced climbers, both non-elite and elite, and to evaluate factors that influence time to exhaustion while climbing to volitional failure.

Conclusions: These results indicate that a longer climbing time to exhaustion is related to self-reported climbing ability. In contrast, the negative association between protein intake and climbing time, suggest that carbohydrate intake may play a more important role in climbing performance than protein intake. In addition the negative association between total percent water and climbing suggest that the more hydrated a person is going into a climb, the longer they can sustain a climb.

Funding Sources: This research was supported by Grant Award BUCSR-Y3-010 from the Bastyr University Center for Student Research.