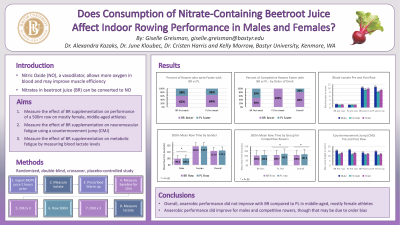 Has Audio
Objectives: The nitrates found in beetroot juice (BR) are known to be a precursor of nitric oxide (NO). NO is a known vasodilator which allows more oxygen to travel in the blood and may improve muscle efficiency. This study aims to measure the effect of BR supplementation on performance on 500-meter row time for trained CrossFit athletes. Many past studies have analyzed the effect of BR on male athletes, this study aimed to include both males and females.

Methods: This study used a randomized, cross-over, double-blind, placebo-controlled design to measure 500-meter row time. Thirty athletes age 18-60 consumed either a 2.7 oz shot of BR (6.5 mmol nitrate) or a placebo nitrate-free beetroot juice (PL). Two hours later, they rowed 500 meters. After at least a seven-day washout period, athletes repeated the 500-meter row with either BR or PL for comparison. This study was performed from July 2019 – January 2020 and was conducted in Mercer Island, Washington.

Conclusions: Dietary nitrate improved indoor rowing performance in males but not in females. In addition, competitive rowers were also significantly faster with BR, however, there may be an order bias, since there was significant interaction between beverage type and testing order. Food based nitrate supplements may increase rowing performance with male rowers.