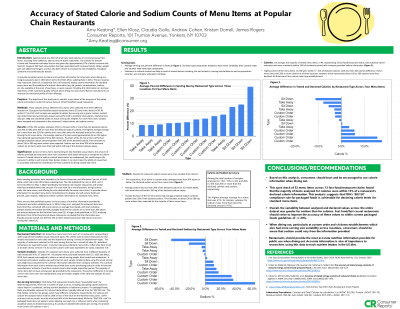 Objectives: The objective of this study was to evaluate the accuracy of stated calorie and sodium content of various menu items from 13 fast food/fast casual restaurants.

Methods: Three samples of four different menu items (52 total menu items) were collected from 13 popular fast food/fast casual restaurant chains (n=152) in NY, NJ and CT. Each sample was weighed to obtain the serving size in grams. Sodium content was determined and a proximate analysis was performed to estimate total calories. Analytical test data per 100g was calculated based on actual serving size weights. For each menu item, samples were averaged and compared to the restaurant’s stated calorie and sodium counts.

Conclusions: Across 52 menu items representing 13 fast food/fast casual chains, the amount of calories provided by restaurants were more consistent with stated amounts as compared to sodium content. If stated calorie or sodium content inaccuracies are widespread, this could hamper the consumer’s ability to self-monitor their dietary intake. It also impacts the ability of researchers to accurately estimate the contribution of these nutrients to dining outside the home.

Funding Sources: Performed as part of my role at Consumer Reports.