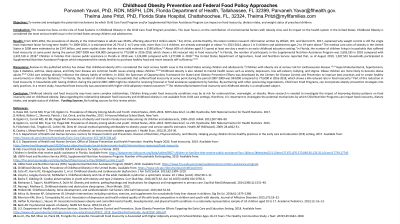 Methods: This review article is based on the new findings and valid published papers by searching pubmed, google scholar, and/or educational and governmental resources.

Results: Childhood obesity is considered the most serious health issue in the United States among children and adolescents. In 2009-2010, it was estimated that 26.7% of 2-to-5-year-olds (more than 1 in 4 children) were already overweight or obese. in 2013-2014, about 1 in 6 children and adolescents ages 2 to 19 were obese. Children with obesity are at serious risk for cardiovascular disease. Childhood obesity is also related to mental health issues. The medical care costs of obesity in the United States in 2008 were estimated to be $147 billion per year. According to the Centers for Disease Control, it is much easier to affect children's food preferences or enthusiasm for physical activity at preschool ages. For Florida WIC participants in 2010, childhood obesity in 10-to-17-year-olds was estimated at 17.8%. Yet, the number of Florida children living in households affected by food insecurity at any point during the period 2007-2009 was 934,000 compared to 773,000 in 2016-2018, which shows a 6% reduction in food insecurity. In Florida, the number of participants in the SNAP was 2,603,185 in 2010 compared with 3,347,518 in 2018. In a recent study, household food insecurity was associated with higher child adiposity related outcomes.

Conclusions: More research is needed to investigate the impact of improving dietary pattern on food insecurity and on childhood obesity. Since childhood obesity increases the risk of chronic disease and disability later in life, we need an in-depth study f the relationship between food insecurity and childhood obesity, including the pattern and trend of this relationship by demographic characteristics among children. It is important to examine the potential mechanisms by which CCFP and/or SNAP could create healthy impact on child health status.

Funding Sources: No funding resource for this review article