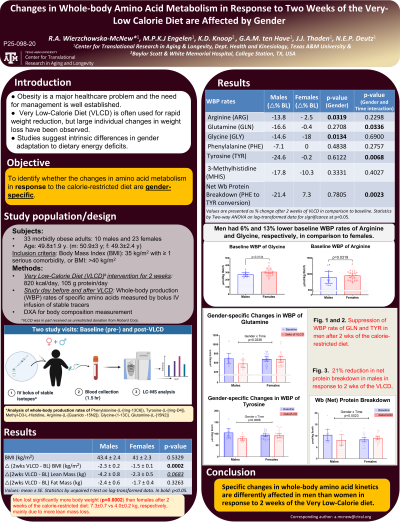 Objectives: Very Low-Calorie Diet (VLCD) is an approved method to safely achieve substantial short-term weight loss in obese patients. We previously reported that two weeks of the VLCD maintains whole-body protein and amino acid turnover despite a large reduction in lean body mass. Since the observed effects on body weight (BW) and composition differed between men and women, we hypothesized that the changes in amino acid metabolism in a response to the calorie-restricted diet is gender-specific.

Conclusions: Despite gender differences in body weight loss and changes in composition in response to a Very Low-Calorie Diet, changes in whole-body amino acid kinetics are not differently affected in men and women.