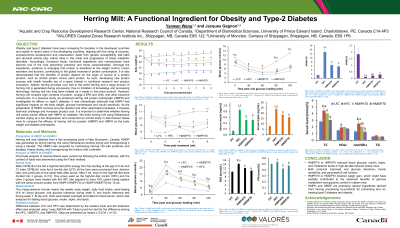 Has Audio
Objectives: The present study was designed to examine the effect of herring milt dry powder (HMDP) on glucose homeostasis and related metabolic phenotypes and compare its efficacy with herring milt protein hydrolysate (HMPH) in diet-induced obese and insulin resistant mice.

Methods: Male C57BL/6J mice were pretreated with a high-fat diet for 7 weeks were divided into 3 groups where one group continued on the high-fat diet and used as the obese and insulin resistant control (HFC) and the other two groups were fed a modified HFC diet where 70% of casein was replaced with an equal percentage of protein derived from HMDP or HMPH. A group of mice fed a low-fat diet all the time was used as the normal or low-fat control (LFC). Body weight was obtained weekly and food intake was recorded daily. Semi-fating (4-6 hr) blood glucose was measured every other week using a glucometer using the blood from tail vein. Oral glucose tolerance was measured twice during weeks 5 and 9, respectively, and insulin tolerance was determined during week 7 of the treatment. At the end of the experiment, serum was obtained following overnight fasting for the measurement of fasting insulin, leptin, free fatty acids and lipids as well as other glucose metabolism-related biomarkers.

Conclusions: The results demonstrate that replacing dietary casein with the same amount of protein derived from either HMDP or HMPH prevents and improves high-fat-diet-induced obesity and insulin resistance.