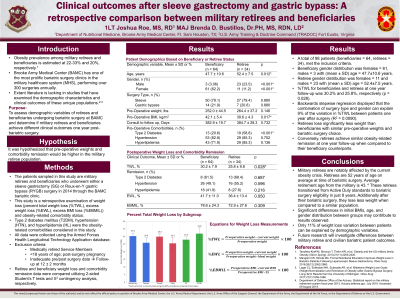 Has Audio
Objectives: Obesity prevalence is estimated at 34% in U.S. military retirees and 28% in beneficiaries of military healthcare, with common comorbidities being type 2 diabetes (T2D), hypertension, and hyperlipidemia. Stressors experienced during active duty service result in higher risk for disabling musculoskeletal injuries, psychological trauma, and alcohol abuse; all of which debilitate healthy weight loss efforts. No literature exists on the demographics and clinical outcomes of military retirees who elect bariatric surgery. The purpose of this study was to assess demographics and determine clinical outcomes of retirees and beneficiaries following bariatric surgery. It was hypothesized that pre-operative weights and comorbidity remission would be higher in the military retiree group.

Results: Ninety-eight patients (64 beneficiaries and 34 retirees) were included with mean ages of 48 and 52 years, respectively. Student’s T test and Wilcoxon-Mann-Whitney test confirmed that beneficiaries achieved greater %TWL at one year follow-up, 30.2% vs. 25.8% (p < 0.05) and 55.5 vs. 38.2 mean rank (p < 0.01), respectively. Beneficiaries and retirees achieved similar remission of T2D, hypertension, and hyperlipidemia. Patient’s sex and surgery type were significant predictors of %TWL variation between groups at one year follow-up. These variables accounted for 9% of the %TWL variance.

Funding Sources: No funding was received to support this study.