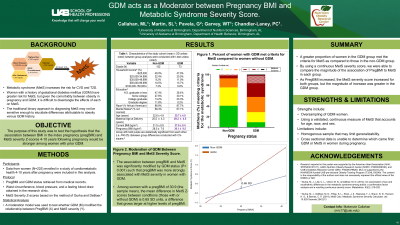 Has Audio
Objectives: Overweight or obesity is a risk factor for Metabolic Syndrome (MetS), as is a history of gestational diabetes (GDM). Many women with GDM are overweight in pregnancy, and so it is difficult to disentangle the effects of pregnancy BMI (pregBMI) from GDM. The purpose of this study was to examine whether GDM moderates the association between pregBMI and MetS severity Z-scores 4-10 years following pregnancy. We hypothesized that the positive association between pregBMI and MetS Z-scores would be stronger in women with GDM compared to women without GDM.

Methods: Data for this analysis were drawn from N=179 women enrolled in a cross-sectional study examining obesity and cardiometabolic disease risk in mother-child dyads. Women with GDM were oversampled relative to the prevalence in the general population. Women were eligible for inclusion if they delivered a healthy term infant 4-10 years prior to enrolling in this study, and were aged 20-36 years at delivery. PregBMI was calculated using measured body weight recorded in the medical record from their first prenatal visit. GDM status was retrieved from medical records. Waist circumference and blood pressure were measured using standard clinical procedures, and a fasting blood draw was obtained to measure glucose, triglycerides, and HDL-cholesterol. MetS Z-scores were measured using the method of Gurka and DeBoer (Metabolism, 63(2), 218-225; Clinical and Translational Science – Informatics and Technology group).

Results: The association between pregBMI and MetS was significantly modified by GDM status (P< 0.001) such that pregBMI was more strongly associated with MetS in women with GDM. Among women with a pregBMI of 30.9 (the sample mean), the mean difference in MetS Z-scores between conditions (those with or without GDM) is 0.65 SD units, a difference that grows larger at higher levels of pregBMI.

Conclusions: These results suggest greater MetS severity in women with GDM and a high pregBMI compared to women with a high pregBMI but without GDM. Future research should prospectively examine whether MetS is present in early pregnancy for women who develop GDM, and whether there are other modifiable factors that could reduce the risk for MetS among women with overweight or obesity in pregnancy.