(P25-005-20) Contextual and Compositional Risk Factors of Overweight and Obesity in India over Two Decades: An Analysis of National Demographic and Health Surveys 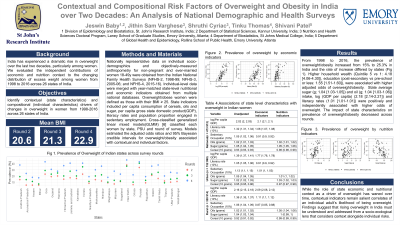 Conclusions: While the role of state economic and nutritional context as a driver of overweight has waned over time, contextual indicators remain salient correlates of an individual adult’s likelihood of being overweight. Findings suggest that rising overweight in India must be understood and addressed from a socio-ecological lens that considers context alongside individual risks.