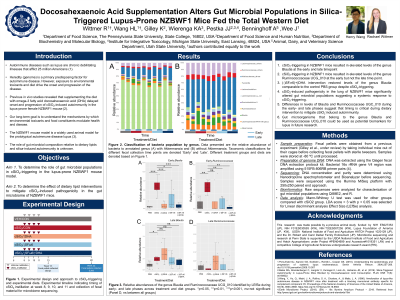 Methods: Four experimental diets were used in this study: modified Total Western Diet (MTWD), MTWD supplemented with DHA (↑DHA), MTWD with reduced saturated and ω-6 fatty acids (↓SFω6), and MTWD with ↓SFω6 and ↑DHA (↓SFω6/↑DHA). Groups of mice (n=8/gp) were fed one of the four isocaloric experimental diets beginning at 6 wks of age. After 2 wks, mice were anesthetized and intranasally instilled with phosphate-buffered saline (PBS) or Si in PBS. DNA obtained from fecal pellets for gut microbiome analysis was collected from an individual mouse at 13 (early-phase) and 22 (late-phase) wks of age. DNA was extracted and sequenced on the Illumina MiSeq platform. The relative abundance of microbial taxa was differentiated by pairwise comparisons using ANalysis of COmposition of Microbiomes (ANCOM), Linear Mixed model (LM), and LDA Effect Size (LEfSe).

Results: Lupus triggering by Si with dietary lipid intervention caused a significant difference in Lachnospiraceae bacterium 609 (Lb609) abundance depending on the stringency of analysis frameworks. Under early-phase data, Lb609 was significantly found to be higher in the group of Si-exposed MTWD (MTWD/Si) than all other groups in LefSe analysis (LDA score >3). LM showed the same results except the comparison between MTWD/Si and ↓SFω6 (FDR-adjust P >0.05). In the results of ANCOM, Lb609 in MTWD/Si was only significantly different from the groups of PBS-exposed MTWD (MTWD/PBS) and ↓SFω6+↑DHA. Although Lb609 was identified discriminatively between MTWD/Si and MTWD/PBS in all analyses from late-phase data, it was not differential in other comparisons.

Conclusions: Lupus triggering altered microbial composition reflected in increased Lb609 and decreased when supplementation was applied. Further, the studies revealed that interventions on microbial populations were dependent on time.