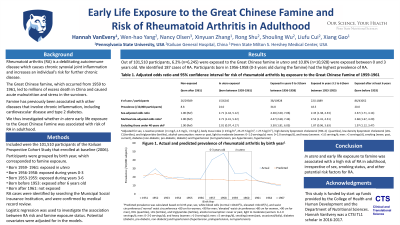 Objectives: Rheumatoid arthritis (RA) is a chronic, inflammatory autoimmune condition. Because the immune system develops early in life, it is possible that exposure to adversity like famine in utero or during early childhood may have lifelong impacts on risk of autoimmune disease. We thus investigated whether exposure (in utero or in early life) to the Great Chinese Famine of 1959-1961 was associated with risk of RA in adulthood.

Methods: Included were 101,510 participants of the Kailuan Study that joined the study at baseline (2006). RA cases were confirmed by medical record review. We used logistic regression to calculate the odds ratio (OR) and 95% confidence interval (95% CI) for RA, according to famine exposure status (exposed in utero, between 0 and 3 years, between 3 and 6 years, or at 6 years or older), in comparison to participants born after 1961 (not exposed to famine). Potential confounders (e.g. sex, body mass index, smoking status, and plasma concentrations of c-reactive protein, low-density lipoprotein and high-density lipoprotein) were adjusted in the model.

Funding Sources: Study funded by start-up grant from the College of Health and Human Development and the Department of Nutritional Sciences, The Pennsylvania State University, and Natural Science Foundation of Hebei Province (H2018209318).