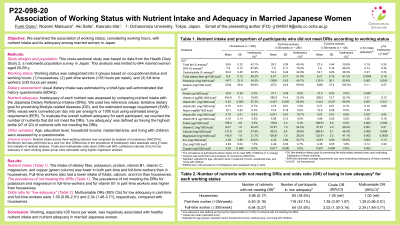 Has Audio
Objectives: Women’s participation in labor force has been increasing; however, married women spend considerable time in housework despite working outside. This double burden may have a negative impact on their health behavior. However, little is known about the relationship between married women’s working status and their nutrient intake. Therefore, we aimed to examine the association of working status, considering working hours, with nutrient intake and adequacy among married Japanese women.

Methods: This cross-sectional study included married women aged 20–59 years. The participants were categorized into 3 groups based on their working status and hours: housewives, part-time workers (who work < 35 hours per week), and full-time workers (who work ≥35 hours per week). Dietary intake was assessed using a validated self-administered questionnaire. For each nutrient, the prevalence of participants whose intake did not meet the Japanese Dietary Reference Intakes (DRIs) was compared across the working status. To evaluate the overall nutrient adequacy for each participant, we counted the number of nutrients that did not meet the DRIs. The participants in the highest tertile category for number of nutrients not meeting the DRIs (≥7 of 20 nutrients not meeting the DRIs) were regarded as “low adequacy”. Crude and multivariate odds ratios (ORs) and 95% confidence intervals (CIs) for low adequacy in each working status group were calculated using logistic regression analysis.