(P22-097-20) Acquisition of Bottled Water Among US Households 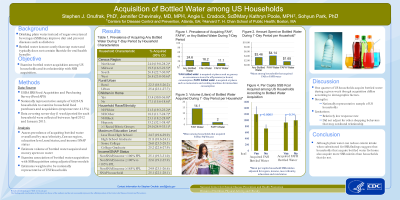 Objectives: While drinking plain water instead of sugar-sweetened beverages (SSB) may improve diet and prevent diseases, bottled water is more costly than tap water and typically does not contain fluoride for oral health benefits. We explored bottled water acquisition among US households and its relationship with SSB acquisition.

Methods: We used data from the USDA Food Acquisition and Purchasing Survey, which collected 7 days of data on all foods purchased or obtained for free in a nationally representative sample of 4,826 households during 2012. Data were collected using food record books and bar code scanners. We assessed the prevalence of acquiring bottled water to bring home and for immediate consumption  away from home, volume of water acquired, money spent on water, and the association of water acquisition with SSB acquisition. Differences in prevalence according to race/ethnicity, Census region, education level, rural status, and income/SNAP status were assessed using Chi-square tests. Adjusted linear models were used to assess the association of acquiring water for home or away from home with per-capita household total SSB calories acquired.

Funding Sources: Solely for authors time from their institutions.