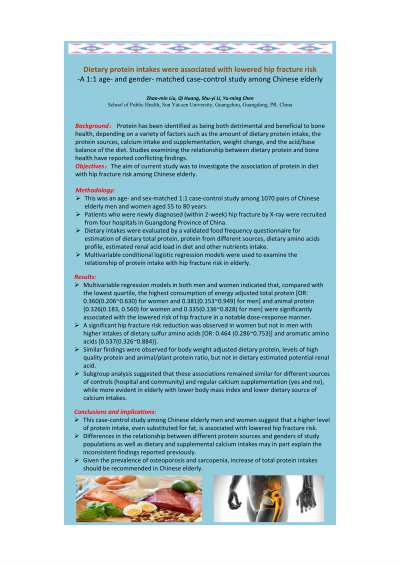 Has Audio
Objectives: Protein has been identified as being both detrimental and beneficial to bone health, depending on a variety of factors such as the amount of dietary protein intake, the protein sources, calcium intake and supplementation, weight change, and the acid/base balance of the diet. Studies examining the relationship between dietary protein and bone health have reported conflicting findings. Thus, the aim of current study was to investigate the association of protein in diet with hip fracture risk among Chinese elderly.

Methods: This was an age- and sex-matched 1:1 case-control study among 1070 pairs of Chinese elderly men and women aged 55 to 80 years. Dietary intakes were evaluated by a validated food frequency questionnaire for estimation of dietary total protein, protein from different sources, dietary amino acids profile, estimated renal acid load in diet and other nutrients intake. Multivariable conditional logistic regression models were used to examine the relationship of protein intake with hip fracture risk in elderly.

Results: Multivariable regression models in both men and women indicated that, compared with the lowest quartile, the highest energy adjusted total protein [OR: 0.360(0.206~0.630) for women and 0.381(0.153~0.949) for men] and animal protein [0.326(0.183, 0.560) for women and 0.335(0.136~0.828) for men] were significantly associated with the lowered risk of hip fracture in a notable dose-response manner (all p for trend< 0.05). A significant hip fracture risk reduction was observed in women but not in men with higher intakes of dietary sulfur amino acids [OR: 0.464 (0.286~0.753)] and aromatic amino acids [0.537(0.326~0.884)].  Subgroup analysis suggested that these associations remained similar for different sources of controls and regular calcium supplementation (yes and no), while more evident in elderly with lower body mass index and lower dietary source of calcium intakes.

Conclusions: This case-control study among Chinese elderly men and women suggest that a higher level of protein intake is associated with lowered hip fracture risk. Given the prevalence of osteoporosis and sarcopenia, increase of total protein intakes should be recommended in Chinese elderly.