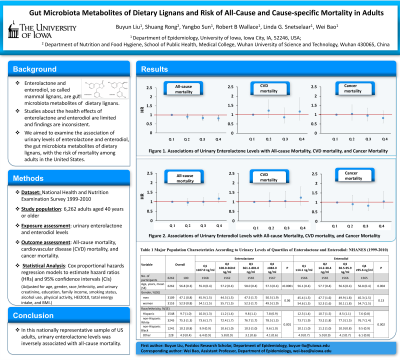 Objectives: Lignans are bioactive compounds exhibiting various biological properties, including anti-inflammatory, antioxidant and antitumor activities. Epidemiological studies regarding long-term health effects of lignans are sparse. In humans, most lignans in plant-based foods are converted by the intestinal microbiota to enterolactone and enterodiol after ingestion. We examined the association of urinary levels of enterolactone and enterodiol with the risk of mortality among adults in the United States.

Methods: This is a prospective cohort study including 6,262 adults aged 40 years or older who participated in the National Health and Nutrition Examination Survey 1999-2010. These participants were linked to mortality data through December 31, 2015. We used Cox proportional hazards regression models to estimate hazard ratios (HRs) and 95% confidence intervals (CIs) for the association of urinary enterolactone and enterodiol levels with mortality from all causes, cardiovascular disease (CVD), and cancer.

Conclusions: In this nationally representative sample of US adults, urinary enterolactone levels was inversely associated with all-cause mortality. Further studies are needed to replicate the findings and determine the underlying mechanisms.