(P22-062-20) Added Sugars Intake by State and Factors Associated with Intake Among US Adults – National Health Interview Survey, 50 states and District of Columbia, 2010 and 2015 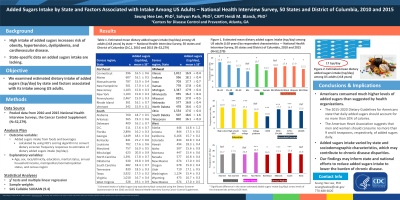 Results: Overall, estimated mean dietary intake of added sugars was 17.0 tsp/day among US adults, ranging from 14.8 tsp/day in Alaska to 21.2 tsp/day in Kentucky. We found statistically higher added sugars intake with adults age 18–24 years vs. age ≥60, males vs. females, non-Hispanic blacks and Hispanics vs. non-Hispanic whites, those not married vs. married, education < high school vs. college grad, income < $35K vs. ≥$100K, nonmetropolitan residence vs. metropolitan, and those residing in South vs. West.

Conclusions: We found Americans consumed much higher levels of added sugars than suggested by health organizations. The Dietary Guidelines for Americans state that daily added sugars should account for no more than 10% of calories and the American Heart Association suggests that men and women should consume no more than 9 and 6 teaspoons, respectively, of added sugar daily. Added sugars intake varied by state and sociodemographic characteristics, which may contribute to chronic disease disparities. Our findings may inform state and national efforts to reduce added sugars intake to lower the burden of chronic disease.

Funding Sources: Solely for author’s time from their institutions.