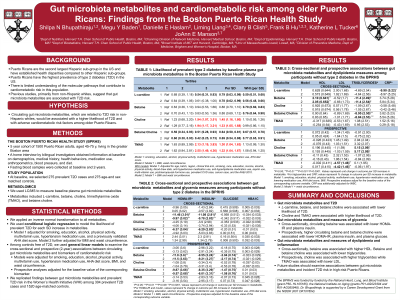 Objectives: Puerto Ricans are the second-largest Hispanic sub-group and have high rates of type 2 diabetes (T2D). Yet, there is limited understanding of the molecular pathways that contribute to cardiometabolic risk in this high-risk group. We hypothesized that circulating gut microbiota metabolites, which have been linked to T2D risk in non-Hispanic whites, are associated with a higher T2D likelihood and cardiometabolic risk markers among older Puerto Ricans.

Conclusions: Plasma betaine, choline, and betaine:choline may be markers of cardiometabolic risk in this high-risk population. Future research should examine dietary and lifestyle correlates of betaine and choline.