(P22-003-20) Effect of the 2009 WIC Food Package Change on Childhood Obesity Depended on the Neighborhood Food Environment for Girls, but Not Boys, in Los Angeles County, California 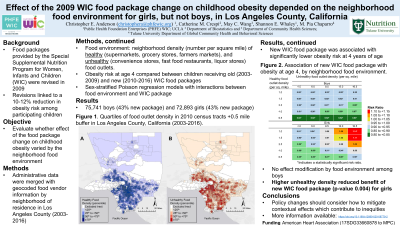 Objectives: Food packages provided by the Special Supplemental Nutrition Program for Women, Infants and Children (WIC) were revised in 2009 to better align them with the Dietary Guidelines for Americans, and this food package change was previously linked to a 10-12% reduction in obesity risk among WIC-participating children in Los Angeles County, California. This study was conducted to evaluate whether the effect of the food package change on childhood obesity varied by the food environment in the neighborhoods where WIC-participating children live.

Funding Sources: The study was funded by the American Heart Association.