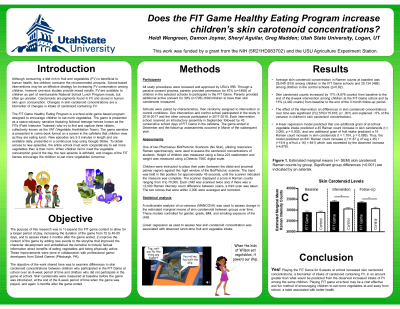 Objectives: The objective of this research was to assess associations between skin carotenoid concentrations and participation in the FIT Game Healthy Eating Program, a school-wide program aimed at increasing vegetable intake among children.

Methods: Randomized-control trial in which two schools played the FIT Game and two schools received no intervention. Skin carotenoids were measured using a Pharmanex BioPhotonic Scanner at baseline, during the last 3 days of the 8-week intervention, and 3 months following the end of the intervention.

Funding Sources: This research was supported by a grant (R21 HD083702) from the Eunice Kennedy Shriver National Institute of Child Health and Development.