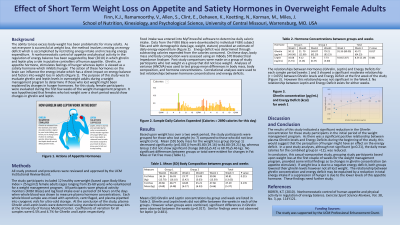 Has Audio
Objectives: The objective of this study was to test if short term weight loss has an effect on appetite and satiety hormones in a group of overweight female adults.  It was hypothesized that participants who lost weight over a short period show changes in Ghrelin and Leptin.

Methods: Twelve healthy overweight female adults participating in a weight management program volunteered to wear physical activity monitors (FitBit Blaze), and log food intake over a period of 24 hours on the days when whole blood was drawn to measure plasma hormone concentrations.  Energy deficit was determined through subtracting calories expended from the calories consumed.  This causal-comparative study identified 7 women (Group 1) who lost at least 1% of their body mass in two weeks and compared their results to 5 women (Group 2) who did not.

Ghrelin and Leptin levels did not differ between the weeks in each of the groups. However when groups were combined, significant differences in Ghrelin were observed between the weeks (p=0.017).  Similar findings were not observed for Leptin (p 0.481).  Correlational analysis showed a significant moderate relationship (r = 0.655) between Ghrelin levels and Energy Deficit at the first week of the study.  However this relationship was not significant in the Week 3.

Conclusions: There were significant associations between plasma Ghrelin levels and Energy Deficits during the beginning of the study, however, these relationships diminished over time.  These findings need further research.

Funding Sources: The study was supported by the UCM Professional Enhancement Grant.