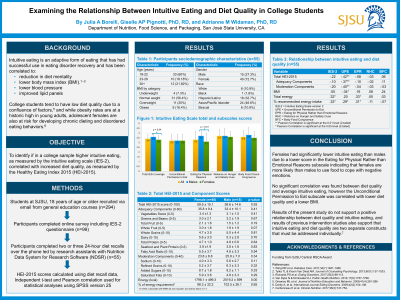 Has Audio
Objectives: College students in the US tend to have low diet quality due to a confluence of interpersonal, intrapersonal, and environmental factors. Restrictive dieting is commonly used for weight management but often ineffective in the long term and can lead to dangerous eating behaviors. Intuitive eating is an adaptive form of eating that has gained interest as an alternative to restrictive dieting due to its successful use in eating disorder recovery and correlation with decreased body mass index in healthy populations. The objective of the current study was to identify if higher intuitive eating, as measured by the intuitive eating scale (IES-2), correlated with increased diet quality, as measured by the Healthy Eating Index 2015 (HEI-2015) in a college sample.

Methods: In this cross-sectional study, participants completed an online survey containing the IES-2 questionnaire which provides a total score for intuitive eating and four subscale scores representing the main behaviors of intuitive eating. The dietary intake of participants was assessed with up to three 24-hour diet recalls, which were completed over the phone. A total of 55 participants (40 females and 15 males) completed the survey and a minimum of two 24-hour diet recalls, which were used to calculate the HEI-2015. Independent sample t-test and Pearson’s correlation were used for statistical analysis.