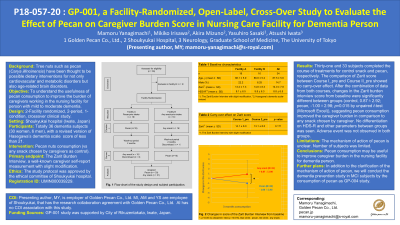 Objectives: Tree nuts such as pecan (Carya illinoinensis) have been thought to be possible dietary interventions for not only cardiovascular and metabolic disorders but also age-related brain disorders. The aim of this study was to understand the usefulness of pecan consumption to improve the burden of caregivers working in the nursing facility for the person with mild to moderate dementia.

Methods: Totally 36 dementia patients, with a revised version of Hasegawa’s dementia scale (HDS-R) score of less than 21, were recruited from 2 nursing care facilities belonging to the Shoukyukai hospital (Iwate, Japan). They were randomly allocated into 2 groups depending on the administration: any snack chosen by caregivers as control and 5 pieces of fresh pecan per day. All patients were received everyday 10 am for 3 months with a cup of green tea to avoid mis-swallowing. After 2 months washout period, the cross-over treatment was done. As the primary endpoint, the Zarit Burden Interview, a well-known caregiver self-report measurement, was used with slight modification to detect the change in caregiver burden during 3 months consumption. Secondary endpoints were grip power test and 5 meters walking test reflecting patient’s physical activity. Blood biochemical analyses including the parameters on cholesterol metabolism were also done. All parameters including HDS-R were examined at baseline and 3 months after treatment. Results with p< 0.05 were considered to be statistically significant. The study protocol was approved by the ethical committee of Shoukyukai hospital. The trial registration ID is UMIN000039229.

Results: Thirty-one and 33 patients completed the course of treatments for control snack and pecan, respectively. Changes in the Zarit burden interview score from baseline were significantly different between groups (control, 0.87±2.92; pecan, -1.00±2.98; p=0.015), suggesting pecan consumption improved the caregiver burden in comparison to any snack chosen by caregiver. No differentiation on HDS-R and other parameters between groups was seen. Adverse event was not observed in both groups.

Conclusions: Pecan consumption may be useful to improve caregiver burden in the nursing facility for dementia person.