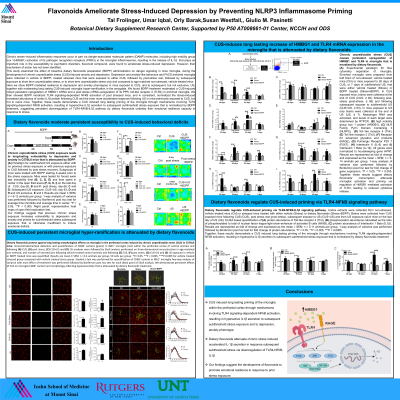 Objectives: Chronic stress activates danger-associated molecular patterns (DAMPs), stimulating the NLRP3 inflammasome. NLRP3 activation triggers the release of pro-inflammatory cytokine IL‐1β. The activity of the NLRP3 inflammasome propagates pro-inflammatory signaling cascades implicated in the onset of depression. Our previous studies show that polyphenolic compounds were found to ameliorate stress induced depression in mouse models. However, the relevant mechanism has not been identified. This study examined the effect of administering polyphenols on DAMP signaling in enriched mice microglia.

Methods: This study examined the effect of administering polyphenols on DAMP signaling in mice microglia. To recapitulate stress-induced depression, mice underwent chronic unpredictable stress (CUS). Microglia were isolated at various time points throughout the CUS protocol. We also assessed long-term persistent changes after CUS and susceptibility to subthreshold unpredictable stress (US) re-exposure.

Results: Interestingly, the development of US - induced depression and anxiety depended upon a previous exposure to CUS. We found that CUS caused robust upregulation of IL-1β mRNA in enriched microglia, an effect that persists for up to 4 weeks following CUS exposure. Following the subthreshold US re-exposure, we observed the upregulation of pro- IL-1β as well as pro-receptor for advanced glycation end products (RAGE). Toll-like receptor 4 (TLR-4) was not. We also observed an increase in RAGE mRNA expression when mice were exposed to US prior to the start of the CUS paradigm. Importantly, a primary exposure to US, was sufficient to increase RAGE mRNA expression. We found that polyphenol administration significantly improved CUS-induced depressive-like phenotypes and also reversed neuroinflammation in mice. Treatment with dietary flavonoids prevented upregulation of IL-1β, RAGE mRNA, which reflects the ability of polyphenols that may have begun following the primary exposure to US.

Conclusions: Taken all together, the results provide evidence of the role of dietary polyphenols in preventing persistent microglial activation, which has been shown to result in reduced long term vulnerability to depressive-like behaviors following expose to chronic stress.

Funding Sources: This study was supported by a P50 CARBON Center grant from the NCCIH/ODS.