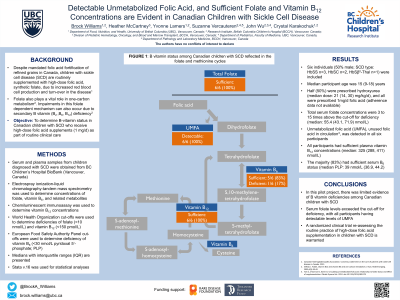 Objectives: Canadian children with sickle cell disease (SCD) are routinely supplemented with high-dose folic acid (1 mg/d), synthetic folate, due to increased erythrocyte production and turn-over in the disease. Folate also plays a vital role in one-carbon metabolism. Impairments in this folate-dependent mechanism can also occur due to secondary B-vitamin (vitamin B2, B6 and B12) deficiencies. The study objective was to determine B-vitamin status in Canadian children with SCD.

Conclusions: In this pilot project, there was limited evidence of B-vitamin deficiencies among Canadian children with SCD. Serum folate levels exceeded the cut-off for deficiency by 3 to 15 times, with all participants having detectable levels of UMFA. A randomized clinical trial re-assessing the routine practice of high-dose folic acid supplementation in children with SCD is warranted.