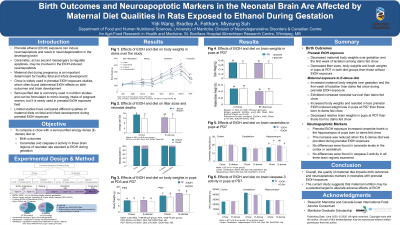 Objectives: Women drinking ethanol (EtOH) during pregnancy may have children with fetal alcohol spectrum disorders (FASD) that vary in the severity of symptoms. This may be attributable to maternal nutritional status. This study examined two different maternal diet qualities, chow vs. formulated energy dense (E-dense) diet, on birth outcomes and neuroapoptotic markers in the neonatal brain of rats exposed to EtOH during gestation.

Conclusions: The E-dense diet provided to dams attenuated EtOH-induced weight loss and ceramide elevations in the hippocampus of pups as compared with the chow diet. Ceramide elevations did not lead to changes in caspase-3 activity, which requires a further study to find whether other apoptotic markers preceding caspase-3 activation are stimulated. This study indicates that the quality of maternal diet impacts birth outcomes and neuroapoptotic markers in neonates with prenatal EtOH exposure, and maternal nutrition is a potential factor to reduce the severity of FASD.